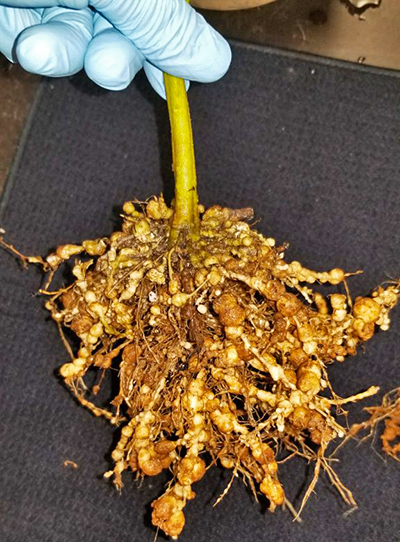 The guava root-knot nematode can reproduce faster and be more aggressive than other nematode species. Those are two factors that all specialty crop producers should be mindful of.

Johan Desaeger, assistant professor of entomology and nematology at the University of Florida Institute of Food and Agricultural Sciences Gulf Coast Research and Education Center, discussed his findings with the guava root-knot nematode during the Citrus and Specialty Crop Expo on Aug. 18.

“Since we started looking at it two years ago in Florida, we found quite a bit of it. It seems to be a lot more common than at least I suspected.”

Nematodes are microscopic worm-like pests that have a wide host range. Root-knot nematodes enter the roots of plants. Feeding on the roots can cause swelling, or “galls,” to develop. Guava root-knot is considered more aggressive than other nematode species. It also has a much wider host range, affecting all vegetables.

Farmers have nematode-resistant varieties in various crops, including tomatoes, but none exist for guava.

“We’ve seen some really bad damage in tomato fields, pepper fields. The problem is in Florida we’ve got so many species, often fields have mixed populations of root-knots, so we have more than one,” Desaeger added. “I think the galls can be more pronounced with this nematode than on some other nematodes. It seems to reproduce a little faster than these other species and get more generations in a season.”

Guava root-knot nematodes have to be identified molecularly, which is what Desaeger and his team are doing through his lab in Wimauma, Florida.

Fumigation and nematicides remain growers’ best line of defense against this newer root-knot nematode species. Producers need to understand what nematode species they are dealing with before implementing a management solution.

To learn more about this research and all of the other exciting things going on at the University of Florida’s Gulf Coast Research and Education Center, join us on November 2 for the Florida Ag Expo. Register now!