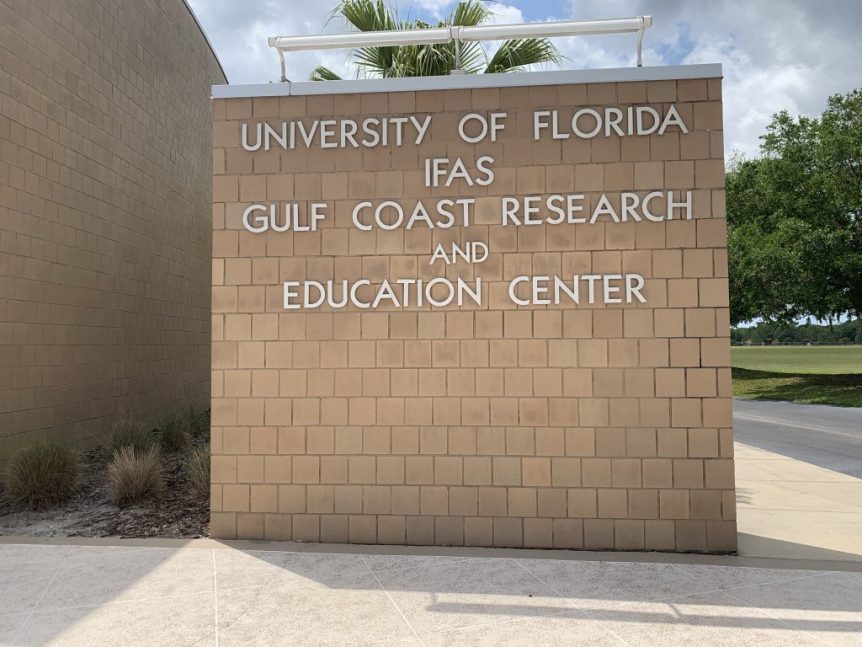 Faculty members at the University of Florida Institute of Food and Agricultural Sciences (UF/IFAS) Gulf Coast Research and Education Center (GCREC) pride themselves on providing cutting-edge research for Florida’s agriculture industries. Located in Wimauma, the 475-acre facility sits in the heart of Hillsborough County. The center features large fields of research plots, laboratories, educational programs and space for student living.

GCREC Center Director Jack Rechcigl recently opened the center’s doors to the VSCNews team for a tour. Although there are many research projects being conducted at the center, here are a few highlights.

SUPPRESSING DISEASE WITH UV LIGHT
Several UF/IFAS researchers are currently working on technology projects that could help growers stay on top of their crop while saving money. Natalia Peres, a professor of plant pathology, has been working with a global group of scientists to see if UV light can zap away plant pathogens like powdery mildew. During the GCREC visit, Rodrigo Borba Onofre, one of Peres’ Ph.D. students, discussed the work.

Peres’ lab, in partnership with researchers in New York and Norway, has been working on this project for several years. After seeing the efficacy of the UV treatments on plant pathogens, the global research group realized the potential of the method. “Using UV light is a clean and sustainable way to suppress disease,” says Onofre.

In Europe, UV light has been tested to suppress disease, but mostly in a greenhouse or high tunnel setting. So, the group set out to find a way to use the UV light in the field. In the beginning, researchers tested the impact of UV light by towing a unit with the lights on a tractor, operating at nearly three miles per hour. The UV applications must be applied at night to see results. Last year, the research group contacted another group in Norway to discuss the possibility of building a UV robot. “So, they (the Norway group) flew to Florida and in the course of three to four weeks, they built two robots for us,” Onofre explains.

The u-shaped robots use global positioning system technology to navigate through the strawberry beds on a predetermined track at a set speed. The operator uses a controller to move the robot to the end of the bed, then the machine takes it from there. The robots are custom sized, so growers do not have to worry about bed damage.

So far, researchers at the GCREC have seen success with the machine and the UV light treatments. “It’s impressive to see that just by applying lights at night, we were able to suppress (powdery mildew) equally or better than … fungicides in the market right now,” Onofre says.

WORKING WITH ALTERNATIVE CROPS
The GCREC team works on a multitude of crops historically grown in the Central Florida region, but researchers have also been dedicating their time to finding new alternative crops for the state. One project that has gotten some attention is the hops yard. Shinsuke Agehara, an assistant professor of horticultural sciences, has been working on hops for the past few years.

Due to increased grower interest and potential, the GCREC has expanded its hops yard from about .8 acres to 2.2 acres. “We saw good potential in this crop to become successful and be grown in the state, so there’s more things we have to study,” Agehara explains.

With the expansion, Agehara will continue to study hop production practices. He seeks to find optimum plant spacing and trellis height, as well as figuring out a sound nutrition program. Agehara also hopes to discover some ways to reduce crop stress since he has found that hops can become stressed in the summer.

Hops are historically grown in the northwestern United States, where conditions are obviously very different from Florida’s unique climate. However, Agehara is hoping to use the climate to Florida growers’ favor because the opportunity exists to harvest two crops per year instead of just one. “This is the only place we can grow hops twice a year … but we have to manage the stress during the summer,” he says.

Blackberries are another alternative crop the GCREC faculty is working on. Agehara is looking into production practices for that crop, and Zhanao Deng, professor of ornamental plant breeding and genetics, is working on developing blackberry varieties suited to Florida’s climate.

Deng started working on the blackberry breeding program about four years ago after noticing grower and consumer interest in the crop. Now, Deng reports that several growers in North and Central Florida are producing blackberries.

Currently, all the commercial blackberry varieties were developed in Arkansas and need about 300 to 900 chilling hours. Those hours are nearly impossible to achieve in Florida. “We usually have about 100, maybe 200, (chilling hours),” Deng explains. “Without sufficient chilling, the plants don’t grow and produce well.”

Hemp is also being studied at the GCREC as one of the approved locations for the UF hemp pilot program. Rechcigl says he is excited to see how well the crop grows and to be involved in making history in Florida.

KEEPING GROWERS INFORMED
The main goal for each researcher at the GCREC is to help Florida growers, whether that is by tackling a troubling pest or disease, finding the best method for weed control, or studying a possible new cash crop. One way the center strives to keep growers informed on its research is by hosting the annual Florida Ag Expo. At the event, growers can hear details on different projects straight from the experts themselves. Attendees can also see these projects firsthand during the field tours at the event.

Under new management by AgNet Media, Florida Ag Expo is set to be an event that growers won’t want to miss. It will take place Nov. 21 at the GCREC. The agenda can be viewed on here. Registration will open on Aug. 12. All preregistered growers will be automatically entered for a chance to win a John Deere gun safe courtesy of Everglades Equipment Group. Stay up to date on the event at FloridaAgExpo.net.